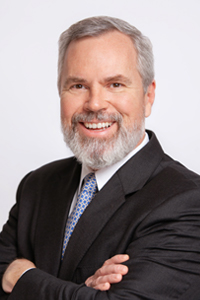 Douglas Chandler grew up in the Northwest corner of Georgia in LaFayette, Walker County. Upon graduation from Auburn University he was commissioned as a reserve officer in the United States Navy. As a Lieutenant and Naval Flight Officer, Douglas was assigned to the Grumman E-2C “Hawkeye” Aircraft.

While on reserve status, Douglas attended Samford University’s Cumberland School of Law where he served on the Board of Directors of the Cordell Hull Speakers Forum. Before entering private practice, he was the law clerk to the Honorable D. Al Crowson, State Court of Alabama, and a Law Clerk at Ferguson & Saunders, LLP of Atlanta.

Douglas is a Board Certified Legal Malpractice Attorney, Co-Founder and Executive Committee Member of the State Bar of Georgia Professional Liability Section, and an active lecturer and panelist on the topics of Law Firm Risk Management, Legal Professional Ethics, and Malpractice Prevention. He has been recognized multiple times by his peers and Atlanta Magazine as a Super Lawyer and Legal Elite by Georgia Trend Magazine.

Highly active in the Atlanta community, Douglas has served or currently serves in leadership roles at his church, with his children’s school, and with local organizations such as the Fernbank Natural History Museum’s Lost Oasis fundraising event. When not practicing law, Douglas enjoys spending time with his family outdoors, fishing, hunting, and playing tennis.